Our next author interview is with Louise Beech, aka Loulou. Louise has been a member of WritingForums.com since 2006, and is a great example why we should never give up hope of getting that elusive book deal! So the synopsis of my life, haha? We all know how hard those are to write. Let’s just say it’s a been a long, tough journey getting here, but I’m really happy, with a wonderful family, a job I love as a theatre usher, and enough time to write, travel and be silly on the side.

What inspired you to write How To Be Brave?

In 2007, just after the most severe UK floods, my seven-year-old daughter Katy was diagnosed with Type 1 Diabetes. We lost our home, car and belongings to the water, then our daughter’s health, and I gave up my job in travel to care for her – all in the space of a month. Three years after this Katy went through a delayed reaction to the diabetes and refused her life-saving insulin injections. The only thing that persuaded her to have them was storytelling – in exchange for fiction she accepted the needle. When fiction wasn’t enough we went in search of truth and I told her the story of my grandad, Colin Armitage, a Merchant Seaman who survived fifty days lost at sea during the war. The whole experience got me thinking what an amazing short story it would make. That’s how the novel started. How to be Brave (the short version) shortlisted for the Bridport Prize. Then I had the confidence to approach it as a longer work.

How many submissions did you make to other publishers before Orenda Books commissioned your book?

It was a long, long, long journey before Orenda Books bought How to be Brave. My first novel (written in 2008 ) got me an agent in 2012, and for two years Carol was amazing, and tried to sell my first and then my third novel. The consistent feedback from editors was that the writing was beautiful but they didn’t know what to ‘do with me.’ What genre was I, where did I fit on the bookshelf, which author was I like, why wasn’t I the new *insert famous author’s name here*? But I can only write what I write, what I love. I never think about where I fit in when I do. Carol retired in 2014 and I was on my own again. I’d just completed How to be Brave and knew it was my best novel (my sixth if you include the two I wrote as a teenager/young adult). I couldn’t get another agent. They said the same as all those editors, that they loved the writing but didn’t know what to do with me. I got about thirty or so rejections. So I tried small publishers, and the same happened. Then the novel shortlisted for the Luke Bitmead Bursary Award – and just after I saw on Twitter that Karen Sullivan (previously of Arcadia Books) was starting her own company, Orenda Books. I got such a strong/good/right feeling about her and asked if she’d read the book. She said she usually insisted on writers having an agent but that she loved the sound of it. In February this year I got my book deal! Here’s what she said…

How did you feel when Karen at Orenda Books informed you she wanted to publish your book?

I can’t describe how happy I was. I clapped my hands, I cried, maybe even danced a bit.

When nine-year-old Rose is diagnosed with a life-threatening illness, Natalie must use her imagination to keep her daughter alive. They begin dreaming about and seeing a man in a brown suit who feels hauntingly familiar, a man who has something for them. Through the magic of storytelling, Natalie and Rose are transported to the Atlantic Ocean in 1943, to a lifeboat, where an ancestor survived for fifty days before being rescued. Poignant, beautifully written and tenderly told, How To Be Brave weaves together the contemporary story of a mother battling to save her child’s life with an extraordinary true account of bravery and a fight for survival in the Second World War. A simply unforgettable debut that celebrates the power of words, the redemptive energy of a mother’s love … and what it really means to be brave.

When, where and in what formats will your book available?

The book will be available as an ebook (for Kindle etc) 30th July, as an audiobook around the same time, and as a paperback in September (date to be 100% decided soon.) It can be purchased from Amazon, Waterstones, WHSmith, iBooks, Hive, Blackwell’s, GuardianBooks, and Foyles, plus on a few foreign book sites.

Do you think that the cover plays an important part in the buying process? If so, why/why not?

I do think a beautiful cover seduces readers, of course. We’re all aesthetically inclined creatures. And it’s the first thing we see. So, yes. But of course a good title matters, and the blurb on the back has to hook. All of these things lead to my reading the first chapter in a bookshop and deciding whether to buy it.

Who designed your cover?

Mark Swan at Kid-ethic Design Studio. He’s done some gorgeous covers for writers like Sylvia Plath, Louise Welsh and AS Byatt. I had trouble deciding on my cover at first, since he designed around seven for me to choose from. They were all stunning, but the two hands (mother and daughter) crossed over one another, with the lifeboat in the centre, haunted me. And I knew that was the one.

What is your view on authors using social media to market their books?

This is a fabulous idea. Makes a huge difference, especially on Twitter where retweeting messages means they reach thousands of people. My number of followers has doubled since I announced my book deal, and many of those people are book bloggers (very helpful to us writers!), editors, and other writers.

What social media platforms will you use?

And I’m on Goodreads if you want to read me/review me there.

What else have you published besides How To Be Brave?

I wrote a newspaper column for ten years so have two boxes of writing there, in the shed. I’ve had perhaps forty or so short stories published. My short fiction has won the Aesthetica Creative Works Competition, the Glass Woman Prize, the Eric Hoffer Prose Award, and shortlisted twice for the Bridport Prize. Later this year the People’s Friend are publishing a short (my second one with them). Since getting a book deal I’ve also written a variety of articles about it, which will feature on the Writers and Artists’ website later this year, as well as in the Irish Times, and on the JDRF (Juvenile Diabetes Research Foundation) website.

Do you work to an outline, or do you just let an idea evolve?

I’ve never written an outline, not for a short story or a novel. I don’t like the restrictions. Following some map. I’d rather wander wherever I end up, off the path. I never fully know the ending until I get there. Who’d want to?

What advice can you offer on writing a synopsis?

Oh God, the dreaded synopsis. It can be as hard as the book. Having to condense 100,000 words into about 500. All I can say is that you must include the full story, beginning, middle, and end. This isn’t a hook, but information so the editor can decide if they’re interested in the story. That said, do try and make it creative. Show off your writing style too. Edit and edit and edit until it’s right.

How long have you been writing seriously, and do you see writing as a career?

Since I was eight or so. Seriously. I have absolutely always known it’s what I wanted to do, who I am. I wrote my own sequel to Heidi when I was about nine. Writing is a part of me as much as my family.

What book are you reading now?

I always read more than one at a time. I’m reading Snowblind by Ragnar Jonasson, The Judas Scar by Amanda Jennings, and The Humans by Matt Haig.

As an experienced writer if you could offer three tips to new writers what would they be?

Don’t try and be anyone other than yourself – write the way you write and never try to conform just to get a sale. Edit harshly. And again and again. Love your work enough to be brutal. And never, ever, ever give up. Keep going. Every single book in a shop is by someone who didn’t give up.

Are there any places you’ve traveled to that have inspired your writing?

Travel always inspires me. I totally have the travel bug. I do find that being on (or close to) water inspires me the most. Both cruises I’ve been on inspired a short piece. Water trickles into my work, whether as a theme or direct plot. I love the sea.

I just edited my previous novel, The Mountain in my Shoe, which will hopefully be out in 2016. I’ve written around six chapters of a new work (loosely titled In 1987), which I’ve had to put on hold with still editing How to be Brave and writing all the articles that go with promotion, etc.

If you were a castaway on a desert island and could choose five books to be a washed ashore with you, what would they be?

The Humans by Matt Haig for comfort. Gone With the Wind by Margaret Mitchell for joy. The World According to Garp by John Irving for inspiration. A Brief History of Time by Stephen Hawking to be blown away. Perhaps How to be Brave to keep me in touch with home.

To keep writing. Always. While I have a heart and brain and fingers. To enjoy my kids growing up. To see more of the world. Have adventures.

The final comments are yours.

I’ll leave you with my favourite quote, from Beethoven. “Don’t only practice your art, but force your way into its secrets, for it and knowledge can raise men to the divine.”

Please don’t forget, How to be Brave will be available as an ebook and on Amazon from 30th July 2015, as an audiobook around the same time, and as a paperback in September!

If you have any questions for Louise, please do not hesitate to ask!

0
Tags
author fiction how to be brave 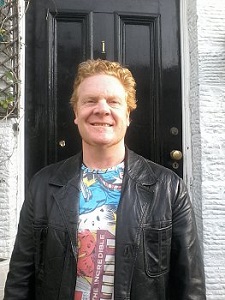 July 28, 2016
Check Also
Close
Interested in writing? Click the image below to join our community for critique and support.