The Orphans by A. Greensward, winner of the ‘Literary Maneuvers’ challenge “We found him in the park” June 2019

“We found him in the park.”

Sugar sighed. Her blonde wig was a bit askew. Red lipstick was stark against her pale, pockmarked skin.

The twins stood in the doorway, not quite meeting her eyes. They stared down at the ground, eyes dark and determined.

“We have to keep him, Sugar,” Bug said determinedly. His hair was in braided black knots dotted all around his head. There was a cut on his shin—a long, red scrape against amber-brown skin.

“We’re keeping him,” said Pocket, eyes narrowed. His hands were shoved into overlarge overalls. His coily hair stuck out in all directions—the largest part of him. “He didn’t ask to be on this earth.”

“Neither did I,” she said coldly.

“You ain’t throw us out, Sugar. He ain’t no different.”

Sugar laid her head against the doorframe and exhaled loudly. Reluctantly, she looked down at the thing.

It looked back at her, eyes unblinking. One of its green gummy paws held onto Pocket’s pant leg. It was only a little higher than his knee. It looked old, though—like a little wrinkled grandfather.

Little green men, she thought. Lord, the things I do.

The twins glanced at each other in silent rapturous delight. Then down at the thing.

“One night,” she muttered under her breath. “Only one night.”

They sat on the dusty rug, watching the thing. It plodded about the room, its weird froglike fingerprints on the old 90’s television set, on Sugar’s piles of scavenged fabric, on her Tina Turner records. Sugar coughed.

“Pocket. Get it out my stuff.”

He cast her a reproachful glance.

“He’s just getting used to it,” he complained, but got up. Gently, he took hold of the creature’s hand and led it back to the rug.

“It kinda looks like a gummy bear,” Sugar offered, then kicked herself. Why was she egging them on?

The twins looked at her in appreciation.

“Gummy,” Bug said, addressing it. It turned its gumdrop head like an owl’s to look, and Bug grinned. “Hey, look! He knows we’re saying his name!”

“He likes it,” Pocket declared. “Gummy.”

It did seem like it knew. Sugar shook the idea out of her head.

The boys went to bed on their own. Sugar told them she’d make the thing a bed in the living room—give it its own space. Truthfully, she wanted to put it out without anyone making a fuss.

The boys would get over it.

“Why’d they have to find you?” she asked.

It didn’t answer. Of course not. Why would it?

It looked back at her, wide strange eyes blinking. Like it was listening.

Them—Bug and Pocket. Standing in the rain. Five years old. Mama fell asleep on the couch—fell asleep and never woke up.

It blinked again. Its froglike mouth opened slightly, then closed.

She felt a jab in her chest. Oh, Sugar, Sugar.

She held out her hand, and slowly, slowly, it put its gummy paw in hers. A tear ran down her cheek. She could swear it squeezed her hand, as if comforting her—her.

The twins had told her before—he ain’t no different. They knew. They saw.

Now she could see.

A. Greensward is a writer from St. Paul, MN. She enjoys writing speculative fiction, fantasy, and poetry. Along with writing, she paints, draws, and studies Hebrew in her spare time. 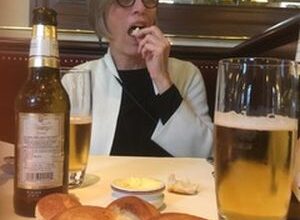 October 20, 2017
Check Also
Close
Interested in writing? Click the image below to join our community for critique and support.